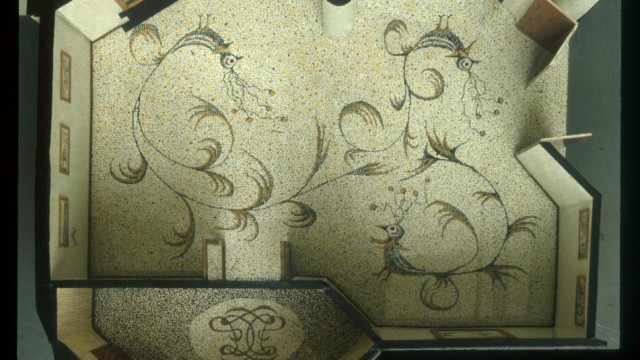 In 1955, with the project for the large condominium complex on Via Nievo, it shaped the design of the building via Vigoni 13, in an area not for intervention. It was in a newly formed tissue, whose bulk densities were dictated by the planning instrument then in force. The building is contributed to the construction of a continuous curtain of tall buildings. The presence of S. Celsus complex constituted for that area an emergency, certainly of extreme value. The asymmetrical shape of the pair of bow-windows close to the center of the front and arranged on all floors above the ground level, are projected towards it.

The building consists of seven floors above the ground, plus a basement, in a rectangular plan. Overall coherence of the many architectural elements, materials, coloring, detail solutions, participating in the construction of this building are held in by a drawing unit itself extremely briefly, around which everything takes shape. The basement is covered in part strain of Camerata Cornello; above it rise six stories that highlight pairs of balconies that take different depths accompanied by diagonal strokes. The balconies originate from minute solid elements in strain at the extreme sides of the front are inseparable from the presence of a pair of bay windows, each of which plays a special relationship with the balconies: one is part of the terrace, the other surmounts only half. All this elements are a gentle motion to horizontal strokes, but the dynamic game is multifacetted and involves the whole body even in  height and depth: the close distance between the bow-window determines a range that breaks down into two parts on the front, the marcandone sense of verticality and lightness, while the continuous line of extruded gutter leads it to a firm unity. The strong presence of the diagonal wall section that closes one of the two bay windows and separates them, is marked in its pronounced verticality of the giant chimney. The chimney ends beyond the coverage and is covered with ceramic tiles continues below the extruded gutter forming vertical stripes increasingly thin until departure at the bottom of this “blade” diagonally and vertically inserted deep into the body of the building, making inseparable the outer elements of the face such as terraces and bay windows with the rest of the body. It’s the ’emptiness’ that welcomes access to the building on land that links the vertical diagonal.

From this reading should be better understood the hierarchy with which the many elements come into play textural and color-wise: the conclusion with the strain of the building ends with the planter element strengthening the corporeality of the side, while the opal dark red at the base of the bay window, or the different color of the plaster coating of fronts and sottobalconi, respond as a entity aiming for lightness.