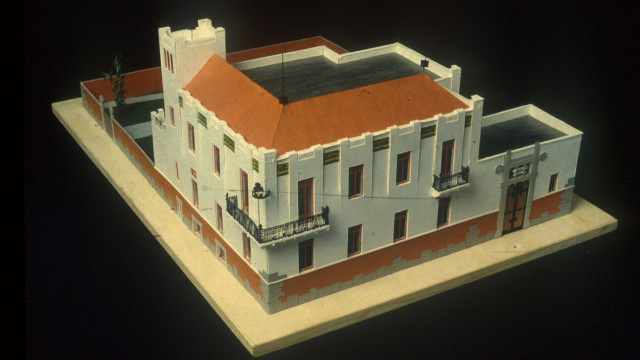 Ernesto Basile (1857 – 1932) was an italian architect and professor of technical architecture in the University of Rome. In Italy he is considered as one of the most important exponent of modernism and Art Nouveau. He was one of the pioneers of Art Nouveau in Italy. His stylistic fusion of ancient, medieval, classical and modern elements caused that he became well-known.

Villino Basile is a small family residence. “Villino” is Italian word to specify the house of moderate size, semi-detached, surrounded by gardens, located mainly in residential areas. Villino Basile was Ernesto’s own private home and studio built by him in a Liberty district of bourgeois residences in Palermo. For his villa Ernesto chose a more open attitude towards its conservative surrounding neighborhood. But to secure primacy and intimacy he inserted an horizontal brick claded wall. The facades of the Villino Basile were designed in pure Mediterranean style. The Catalonian, Greek and Egyptian influences were merged perfectly. The facades have regular openings and simple merging of volumes. The main entrance is represented by an iron gate with an inscription on top. It leads to a passage that acts as a mediator between the public and the private life. The plan is based around the dining room positioned in the center – in the heart of the home. It symbolized the nucleus that holds and brings the family together. An essential element in the interior design of this special room is the stove, bringing comfort and coziness to the home that may seem very restrictive, cold and conservative from the exterior facades. We can say that Villino Basile was designed with one thought in mind: the family’s comfort first and after that the decorations derived from the functional and structural principles.