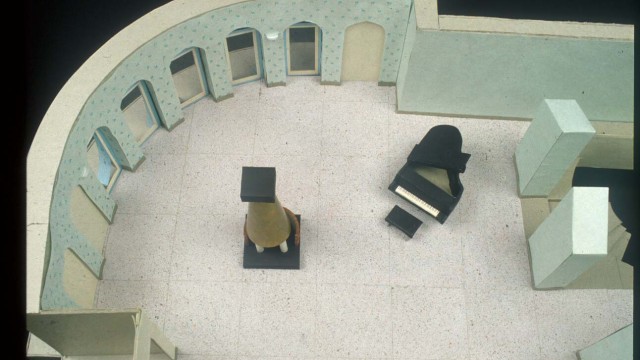 Born in Milan, Italy in 16 August 1931, Alessandro Mendini is an architect and designer. His design has been characterized by his strong interest in mixing different cultures and different forms of expression, where he creates graphics, furniture, interiors, paintings and architectures.

Mendini graduated from Politecnico di Milano in 1959 with a degree in architecture. Just as works of the Renaissance period, he expressed human values and sesibilities, and contributed to bringing into the heart of design those “values” and “sensibilities” that have been eclipsed by commercialism and functionalism.

As an architect, he designed several buildings, such as Alessi residence in Omegna (Italy), the theater complex “Teatrino della Bicchieraia” in the Tuscan city of Arezzo (Italy), a memorial tower in Hiroshima (Japan), the Ceramics Museum in Incheon (South Korean), the Groninger Museum (Netherlands) and the Arosa Casino (Switzerland). Especially, The Groninger Museum is considered one of the most amazing postmodern buildings of the late 20th century, and was also selected as one of the “1001 Buildings You Must See Before You Die.”

Currently he runs his own practice in Milan, the Atelier Mendini, together with his brother Francesco Mendini.