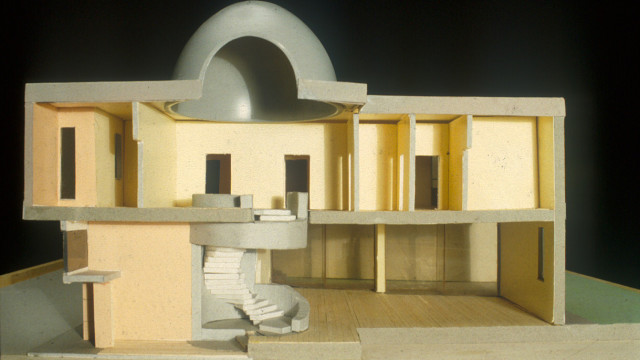 Franco Albini designed an house located in an urbean area in 1967-1970 with Franca Helg.  It was named the « Villa Corini » or « Casa Corini » and it is located in Parma.

The principal style of  house is classical. The facade on the side of the street is massive with few windows and is in contrast with the glass façade which can be seen from the garden. The horizontal strips in fire brick, plaster and concrete divide all the façades into two parts : the two floors. There is also an other strip only in fire brick at the top on the second floor wich bounds the ceiling with a dome.

Inside, the spiral scale made of white stone, almost reaching the dome, is the key point of this individual house. Furthermore the two level are organised in different ways. The first floor has large rooms with a lot of space while the first floor has more rooms (but smaller), more traditional, especially because it is dedeicated to private areas. This difference of space might give an impression of movement inside the house.