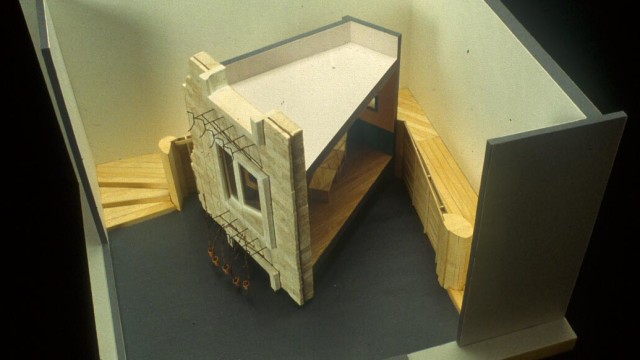 Umberto Riva (Milan, June 16, 1928) is an Italian architect and designer. He studied architecture in Venice, where he studied under Carlo Scarpa, graduating in 1959, and began his professional career in Milan in 1960. In 1985 he presented the project of Casa Frea  at the Biennale in Paris and the exhibition “Progetto domestico” of the XVII Milan Trienniale. In 1987 he took part in the exhibition “Imagined Cities” with a project of Ancona. He has been teaching first in Palermo (1982-1983), then Venice (1987-1998), Milan Polytechnico (1992-1993), the European Institute of Design in Milan (1997-1998), and at l’ Ecole d’Architecture in Nancy and since 1999 at the Academy of San Luca.

The Serramento serra designed by Umberto Riva was presented at the XVIII Triennale in Milan in 1986.
The project has been designed to show the possibilities of a window and is applicable to different contexts. It is based upon the main ideas of energy saving of the house, the role of the window within the relation inside-outside and it aims at defining an inhabitable and comfortable space.
The window leans on a wide windowsill and it is shown as a 1:1 architectural cutaway maquette visible from an interior perspective thanks to an elevated cutaway.
The window is made of a double frame one of which is directly openable towards the exterior while the otherone defines a greenhouse window which in turn is made of 4 glasses  (2 openable and 2 fixed to the frame). The architect designed the window in a way that the glasses are not parallel to each other but they form an angular surface in order to exploit in a better way the orientation.
The inner frame is equipped with some air guts at the top and at the bottom in order to facilitate fresh air to come in and exhaust air to go out.
The materials plays an important role as well because of their reaction to heat. Also a kind of heavy fabric is used in the design, inserted in the central part, between the two layers of glass, to act as sun shading and as an insulation layer. In the exterior a metal support at the bottom of the wondow is designed for growing greeneries, this particiaptes in the cooling process, as it works as a shading from the sun.