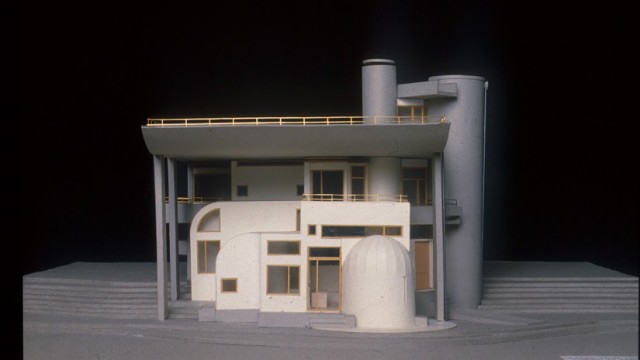 Villa Bayon is located in via Beato Ippolito Galantini 10 in Florence. Inserted in the Village of St. Francis, the villa is surrounded by a garden with a fence of trees and you can access the villa via Via Galantini .

Although the villa is situated in an area with great landscape relevance, we can say the building has a great architectonic absolute autonomy, which don’t form a dialogue with the landscape, its surroundings and the reference to Tuscan tradition.

When we look at the villa we discover a free combination of volumes in space and between the volumes a dispersion of light.

It consists of two stories, which are completely independent volumes and the rooms are each also self-contained. The planimetric system results out of the combination of dynamic geometric matrices (like a square, a rectangle, a circle,…). In the opposite of the forms follows function buildings of the twentieth century.

This architecture is characterized by a main system; a big roof terrace made of armed concrete, which rest on some pillars and a cylindrical staircase; and the underlying elements, which are combined in a dynamic play of protrusions and recesses derived from the geometric combination of forms that were put together.

The spatial experience gets even more enriched with the volumes of the balconies, the aluminium elements, the frames of doors and windows.

Every opening, every extrusion, every shadow takes part in the spatial dynamics of the building. But always with respect to the enlightening and atmosphere of the inner space.