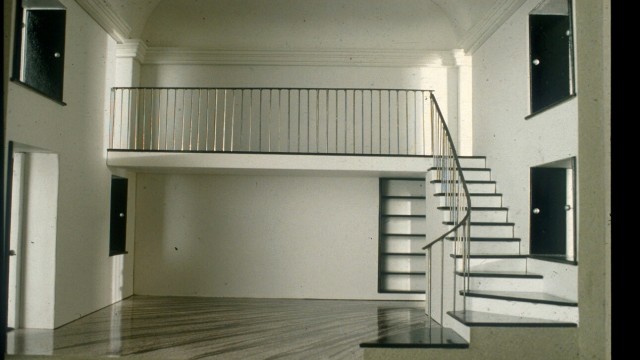 Born in 1913, in Milan, he graduated from the institute Leone XIII of Milan. Later he went to the Politecnico di Milano and graduated in 1936. He joined the military of Italy between 1939-1943 but then, he refused join the social republic of Salo. He went to Switz. In 1945 he returned to his architect works. He was quite famous for it, especially monumental, luxury and sacred buildings.

His design is a double floor space with a mezzanine. The contrast of the simple edges and surfaces is creating a feeling of luxury in the interior space. The bookshelf is hidden in the wall so it does not disrupt the united space. The classical ceiling is without unnecessary details and it works as an extension of the white walls.