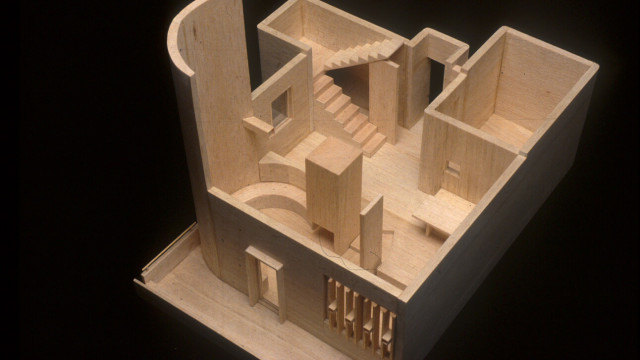 In 1965, Leonardo Savioli participated at the ‘Casa Abitata’, an exposition in the Palazzo Strozzi in Firenze with Michelucci as the curator, with the project ‘Cellul a minimale’. ‘Casa Abitata’ is Italian for ‘inhabited house’ and ‘cellula minimale’ means ‘minimum cell’.’Casa Abitata’ is just one of the expositions he did in de sixties for example he also participated at ‘dell’Oggetto moderno‘ (1962) and ‘Le Corbusier’ (1963).

With ‘cellula minima’ he designed a prefabricated ‘living cell’ which is insertable at any place. It’s a minimal structure which is insertable in to a macrostructure. Cellula minima can be compared with Le Corubsiers maison Domino. The reinforced concrete structure is a modulus of 12 x 12 meters and has fixed area’s such as a kitchen, bathroom, stairs, fireplace,… The internal structure is free to modify which allows the inhabitant to adapt it to it’s own needs. On the one hand you have a brutalistic structure, on the other hand you can create your own space. The fireplace is placed in the middle of the building and divides, but also connects, the living room with the kitchen. In the whole building, there is no furniture but on the ground floor a fire place and a sofa are built in concrete and integrated in the design. The roof terraces is accessible and service equipments (electricity, water and gas) are installed on top so the moduli can connect with each other. The second modular system are the elements like windows, panels,… which can be easily plugged in in different ways so not all de buildings are the same.