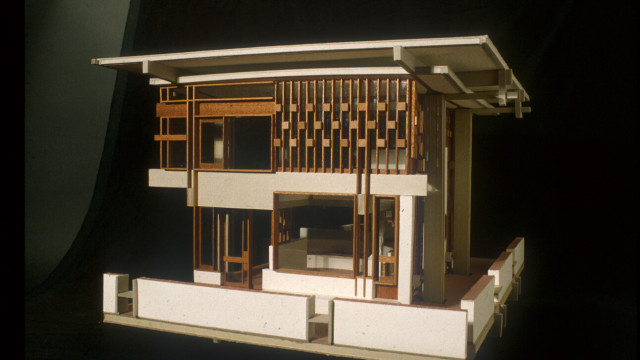 Leondardo Savioli was born 1917 in Florence, he studied at the university of the architecture of Florence and teamed up with Danielo Santi for numerous work.

Placed in the gentle slope, close to the city of Stropiello. The villa lies along the contour lines, forming a concave curve, that accommodates the slope, extending downstream volumes and orthogonal partitions, overlooking at a large open space, that let you see the entire villa. The relationship between the structural elements of exposed concrete and large plastered surfaces, gives the compositions an extreme clarity that is further emphasized by empty darker stained – glass encased in large wooden frames. The structure is treated as a mix of lines and surfaces as elements of tension and continuity. The furniture is designed accordingly with the architectural space and places on the different material components that are traditional but still meaningful. This building is born from the meeting of Le Corbusier’s and Wrights’ works but also borrowed elements of style from the Tuscany rural places.