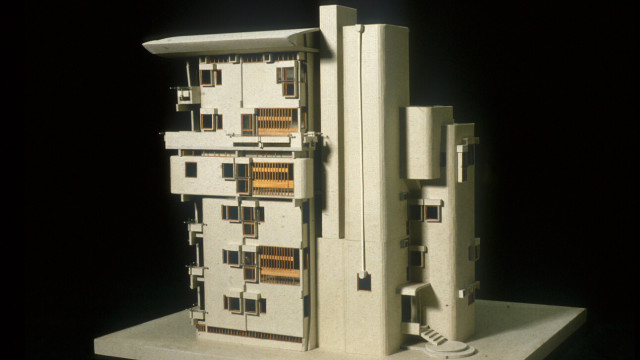 A tall (six story high) corner apartment building in Firenze, Tuscany, Italy, designed for the Bacci family by Leonardo Savioli with help of Danilo Santi. Getting it’s inspiration in historically well recognisable ancestors such as tall residential building with strongly articulated corners and tower-like houses. This apartment building from 1964, like all projects by Savioli, have a raw or brutalist look and a modern idea at the core of its design. The L-shaped plan consists of corners of 60 degrees.  Due to shape of the plot, the building is made out of different volumes mixed together and all connected around the core of the staircase with an elevator.

The commitment to the raw concrete is clearly visible in the interiors where, surprisingly or not, Savioli implemented it a lot. Raw concrete structures, completed not without issues (there were several problems with assembly of the designed module structure: it was changed few times as it was kind of experimental building), a big amount windows (which also encountered problems) and the brutalist look of the building form are the most visible traits of the design. A well prepared entrance, technical basement with garage and a big amount of terraces are other traits mostly appreciated by inhabitants.

All of the subjects, from the structure itself to the details were treated with great care and deep consideration. This gives an outcome of an easily recognisable and widely acknowledged building. Savioli himself, after being commissioned for different types of designs, seized another great opportunity to accomplish an outstanding design .