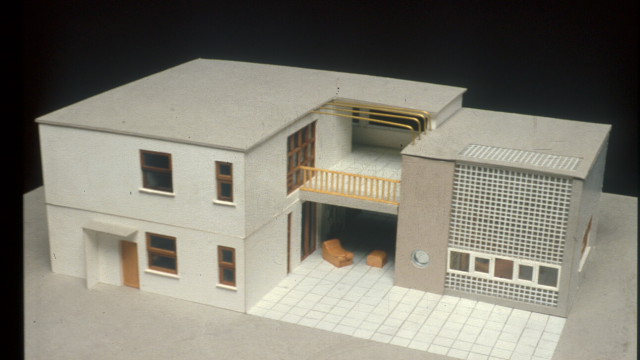 Giuseppe Terragni (Meda, 1904 – Como, 1943) was one of the most important Italian architects in the whole 20th century, despite the fact that his career lasted only for thirteen years, due to an early death during the Second World War.

In 1933 Terragni designed, in the framework of the V Biennale di Milano, la Casa sul Lago per l’Artista, literally the House next to the lake for an artist. It was supposed to be a holiday house for an artist and his family. It is actually both a house and a studio, separated in two volumes that join thanks to a covering.

The house is really clear and sharp in concept and volume. The relations between the three elements (house, porch and studio) create some very interesting situations. One example of them is how the living room extends itself into the porch when all the windows are full opened. Obviously the artist’s studio takes an important place in the project. About it, Terragni said: “The ambience [of the studio] has been conceived and realised according to a mechanic taste, but with concessions to a bohemian flavour”. What he meant with this poetic beautiful phrase, is that the most important thing for a working place is the control of all the conditions that are relevant for that work, including: natural and artificial light, the needing of big, proportionated room in the three dimensions. The north wall of the studio, completely illuminated, is made out of reinforced glass blocks (Perret system) that don’t allow the view from the outside.