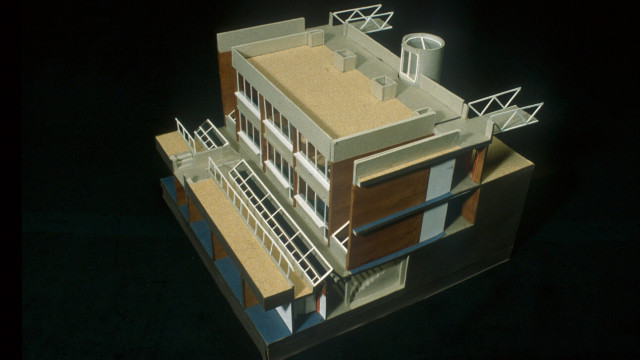 Placed on a hill crowned by the old Capuchinni convent about a kilometer from the historic center of Urbino, the four colleges articulated in the form of a “city-campus university” were produced by De Carlo between 1962 and 1983. It is certainly one of the most important Italian architecture of the seventies and also popular internationally.

The construction of the first boarding school, said “the Hill”, commissioned by Carlo Bo, president of the University of Urbino, dates from the years 1962-1966; the drawn shape is that of a central body on the lookout (with concierge rooms, lounges/recreation rooms, restaurant, kitchen, library, conference room), and a series of independent case studies, placed on terraces sloping down the hill, connected by ramps, stairs and parallel paths to the contour lines. At the same time, they started the construction of the so called “Tridente” (1973-1980), “Aquilone-Serpentine” (1973-1981) and “Vela” (1973-1983), which provided a total of 1,150 rooms. In the overall project, De Carlo, prepares a polycentric structure, developing the project on the form a cluster, influenced by the local context and the morphology of Urbino.

At first, De Carlo places the interactive relationship between the built fabric and natural fabric in the concept of “naturalness of the constructed”, where he searched the maximum interpenetration between the volume shape and the ground shape (ground slope, gardens on roofs, plurality of natural light sources), but without standardization, as he used a great variety of patterns and shapes with his materials. Secondly, De Carlo bases his work in the principle of unity of the material, with the predominant use of the brick, but also the exposed concrete structures for the sun areas and overhanging parts. Finally, his building emphasizes social and creative spaces, public places and meeting places open to university students but also to all citizens of Urbino.