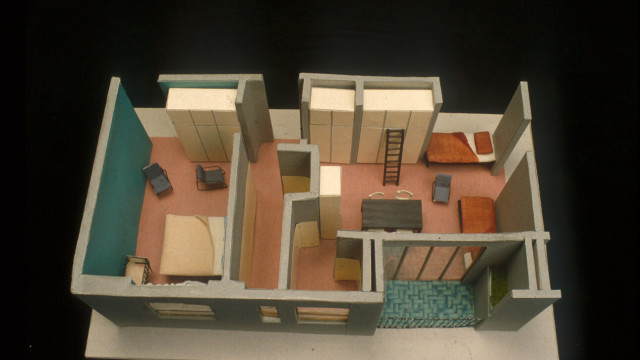 Franco Albini (1905-1977) was already on his way to discovering the ideal Modern style when he opened his studio in 1931. With the rapid increase in population resulting from the social and economical objectives of the fascist regime, IFACP (The Fascist Public Housing Institute) commissioned Albini among other architects for an “inhumanly dense” housing project. When modernism and fascism found common ground at the VI Triennale di Milano, architecture held the key to propagate the regime. Albini revealed his small apartment designs at the Triennale where “functionalist principles intended to guide the industrial standards of mass production for efficient living.”

Fabio Filzi is a neighborhood of row houses. Serialization of accommodation and furnishing, the use of constant modulus of 66 cm. and the adoption of the guarantees offered by it, the exclusion of the public housing materials were key elements in Albini’s design.Two beds are inserted in the living space, which is in close contact with the dining area and the kitchen. In the master bedroom the bed is made of iron, painted black. The headboard is defined by the use of a strip of cork lineolum color applied to the wall. While the clean and simple line is maintained throughout the whole space, rooms are differed from each other with elements like color and material. The walls of the house are gray except for the green master bedroom. 5×10 cm. red stone tiles compose the flooring pattern while the balcony, which communicates only with the living area, differs from the rest by having porphyroid blue flooring.