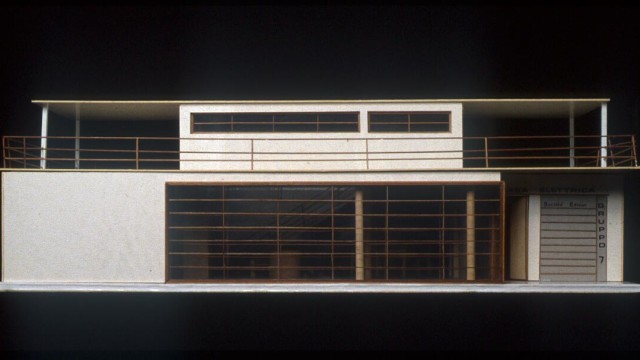 “The Electric House” was exhibited in 1930 at the Fourth International Triennial Exhibition of Decorative Arts and Modern Industry in Monza.
Today the Electric House no longer exists because it was demolished a few months after it was first shown.

The building is an example of a modern villa. It was also an example of space solutions and furnishment. Designed by young architects Luigi Figini and Gino Pollini with the collaboration of colleagues Buttons, Frette and Free at the Fourth International Exhibition of Decorative Arts and Modern industrial Monza 1930.

Unbelieveable modern as its time, the house was designed to be energy managed through the use of electricity alone. Lighting, appliances, ventilation, kitchen, hot water, etc. were all powered by electricity.

The segmentation of the building is very simple. The rectangular complex (16 to 8 meters) connects the first floor with stairs to the upper floor, which is entirely occupied by a roof terrace.

At the front of the building is a covered atrium which entrance is next to the L-shaped walls of the glasshouse.

The back provides entrances to one of the two bedrooms, the dining room and kitchen, the latter also with service exit.

The electric house wanted to be an example, but go far beyond the practical possibilities of the mass consumer. In addition to the greenhouse other internal components were based on the application of relatively valuable finishes.

The building had linoleum floors, walls covered with rubberized material, the banister of the staircase and the loggia were chromed metal. Furniture was finished with celluloid which gave the home an exclusive and wide spread of modern materials.