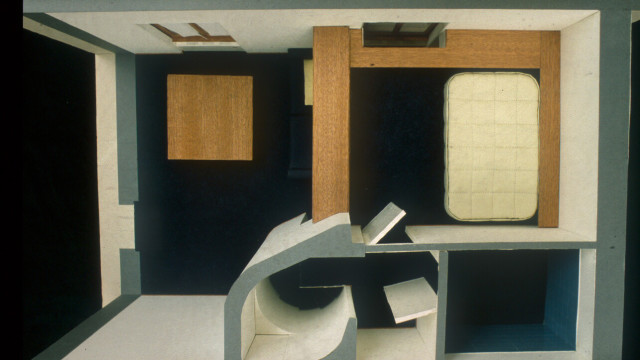 Cini Boeri, born in June 19 1924 in Milan, is an Italian architect and designer. She graduated at the Politecnico di Milano university in 1951.  She began a long collaboration with Marco Zanuso, after a brief internship in the office of Gio Ponti. Boeri has been awarded many prizes; among those, in 1979 a Compass D’Oro and a Lifetime Achievement Award from the Italian Cultural Institute of Los Angeles in 2008. She designed in Italy and abroad single-family homes, apartments, museum exhibits, offices, shops, paying great attention to the study of the functionality of the space and the psychological relationship between humans and the environment.

She designed a small double floor space, having a very modern shapes inside. The furniture used in the flat are very simple, without detailed works. Everything that a person need is fulfilled in this small space. The stairs are having a very special form, hidden by the wall. Mezzanine is a half open space, with a place destined for rest and sleep. The part of relaxation in the house is made by splitting the height of the apartment into two. Simple colours are highlighting the contrast between floor with some furniture and the space-wall part.