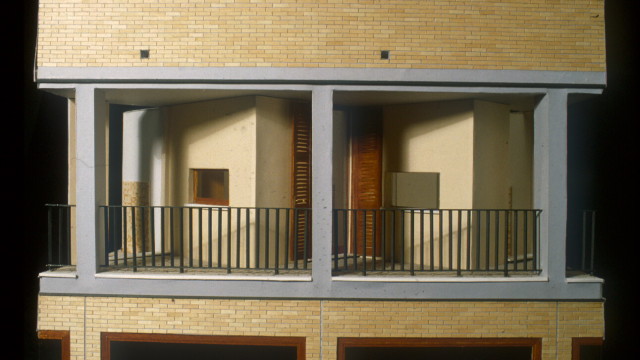 Dedicated to the Master Plan of Milan, the detailed plan of Cimiano south is described as one of its development zones. The Complex should be built along a boulevard and consist of small residential areas connected by wide open spaces for public gardens. Don Calabria Centre is designed by Carlo De Carli between 1952 and 1965 on the edge of the Lambro Parc.

In 1952 work began on the elementary and professional training schools including a laboratory, also a retirement home, a kindergarten and a schools for girls (held by the Ursuline Sisters of Verona), a residence for boys (unrealized), a church and its parish.

The building ground of Don Calabria Centre is a trapezoidal in shape. De Carlis work is determined by the aggregation of architectural units.
The general plan is coordinated by a grid of squares, buildings will be placed as a unit, autonomous in their essence and yet open to the environment and other buildings. The Units in the ground floor are rotated and jut out over the balconies. Due to their shape all units can be connected with each other by a common loggia. Anyway the outer shape oft the building is still rectangular.

„De Carli transferred this idea of “units” interacting with each other from inhabited space to the building elements themselves as seen, for example, in smoothing off the corners of re-enforced concrete pilasters so they relate to their surroundings, – a recurring element present in many of his architectural works.“

„The Cimiano complex looks like a small ideal city on the outskirts, with its layout, its border and its architectural landmarks, even if everything – the shapes and arrangements – seems to be moving.“