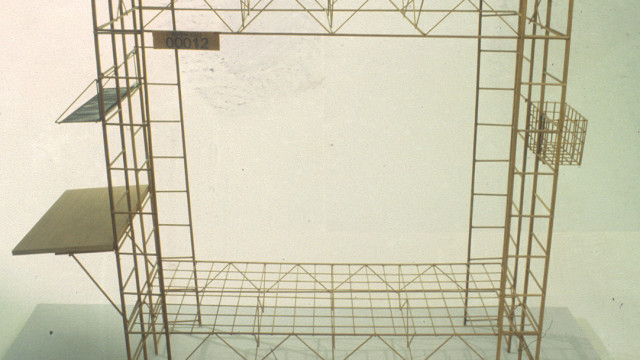 Abitacolo is an educational-fun construction designed by Bruno Munari (1907-1998),  awarded with the Compasso d’Oro Prize in 1979. Bruno Munari was a Milanese artist who contributed fundamentals to many fields of visual arts (painting, sculpture, film, industrial design, graphic design in modernism, futurism, and concrete art, and in non visual arts (literature, poetry) with his research on games, didactic method, movement, tactile learning, kinesthetic learning, and creativity.

The design is characterized by a light and essential structure developing on two levels that can be equipped with various accessories. It is a well defined, yet open space, perfectly suited to those who live in it. Abitacolo is a habitable module that is able to be installed in any bedroom. Because of its playful and modular set-up, it can be customized by each user, which gives the ability to create their own world.

To fully understand the design process that led to the creation of Abitacolo and to avoid the interpretation of a design as just a single bed, we have to take into consideration that it is a space for a children and teenagers. The main elements of the theoretical design basis are neutrality, flexibility and modularity. The young people can enjoy the versatility and can have the possibility of creating their own microcosmos. The color of the Abitacolo is pearl gray, a neutral color which gives the people the freedom to decorate it however they want. Furthermore, the modularity of the parties allows each individual to organize his space according to his needs.

Munari’s Books by art historian Giorgio Maffei, out this month from Princeton Architectural Press, is a bibliography of over 60 publications from 1929 to 1999, printed posthumously after his death in 1997.