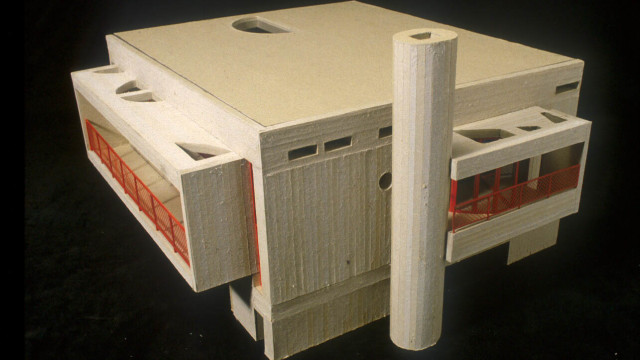 Umberto Riva’s apartment was designed in 1966-1967 by the architect, for himself and his wife, Maria Bottero. The apartment is at the last floor of a cooperative housing block in Via Paravia in Milan, which was also designed by Riva in 1965-1966. With respect to the other apartments, the architect’s apartment differs for its distribution and flows.
The studio consists of a single open space which is split into different environments through the placement of fixed furniture: the cabinets and bookcases, as well as the bathroom blocks, leaving the ceiling in all its continuity, become the building blocks around which the space is divided. The ceiling is painted in glossy white, opaque white, blue and black squares, from which different shaped windows allow the light to enter.

The maquette shows a part of the studio, including the living room and the kitchen, but not the two bathrooms, the entrance area, three bedrooms and a small study area. (The whole surface is about 98 square meters.)
Riva’s poetic approach is fully developed in his apartment where the transgression of orthogonality, the use of wide bands of colour, the design of light through the arrangement and form of openings, and the contrast between the exposed load-bearing concrete structure and several supported volumes emerge within an independency of form and colour.

The ceiling becomes a continuous surface that the walls never touch. Bands of colour are painted on it, giving a sense of dynamic acceleration to the perception of space and fostering the independency of elements. As in an urban fragment, the various volumes in the apartment mark out the main routes and the secondary axes while intimate places and large domestic ‘squares’ are created as pauses within this cicrculation.

Riva’s apartment also shows the architect’s clear interest in the design of natural light and in the resulting relationship between interior and exterior. There is a frequent use of industrial materials combined with customized designed furniture, as if handicraft and industry had finally achieved a profitable relationship through a dialectic made up of differences and distances.

About some details of the interior furniture: it is mainly made of a set of fixed closets all over the house. In the kitchen a concrete table is placed. The divider between the living room and the studio was made out of concrete and eternit. Riva also used wood besides concrete as material, mainly to overlay the library’s shelves.

photos of the interior of Riva’s studio