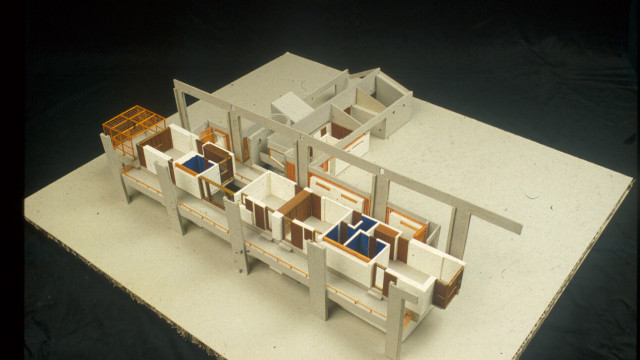 For the construction of this house, Umberto Riva get inspired by Paul Randolph and by Gino Valle’ s works.

The building is the result of a process of co-design with the owner that initially asked for a typical traditional countryside villa with porch, ceramic roof tile, inner court and so on.
The final design resulted to be instead a stretched volume made of a set of interwoven volumes creating a sort of porous space. The house develops in two levels: the living room and kitchen are located in the ground floor, while bedrooms and more private spaces are adjusted in the first floor. There is a strong relation with the surrounding landscape, because Riva uses it as a base when designing from scratch.

The inside of the volume faces the mountains to show the relation with the exterior natural setting. The architect designed a smaller volume for a domestic use and for the kids games. And on the other hand there is a dialogue between the building and the lake.

The reinforced concrete skeleton that encloses the building acts as a skin of the inner brick structure and it is conceived to foster and encourage exchange with the exterior thanks to its strong penetrability. This external skeleton also serves to hold the roof and the U shape beams for the horizontal passages. The inner brick volume instead is designed for the more intimate and private functions and it has been covered by a layer of white plaster.

The interiors are all 2,50 meters heigh with only one exception for the living room, which is in some parts it is double the height. There are also two horizontal passages from the first level that are facing each other.

The overall appearance of the house is the result of a reinterpretation of the residential typology of the ‘cascina’: the sensation is that the house has been designed in favor the relation with the landscape. This aspect breaks with the tradition and liberates the house from the former concept of bourgeois villa that was, on the contrary, based upon the concept of absolute privacy and closeness. This aspect is to be considered among one of the most radical statement ever made before with respect the Italian villa typology.