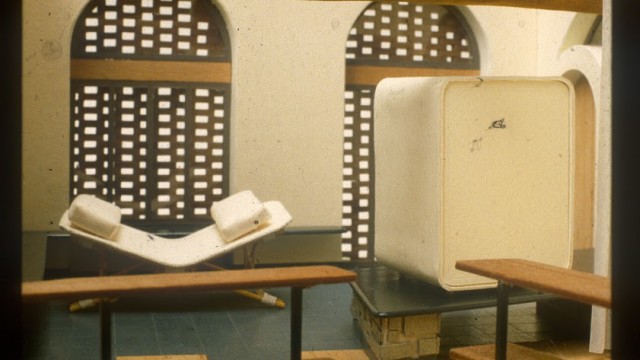 B.B.P.R. is a studio of architects, planners and designers, composed of Gian Luigi Banfi, Ludovico Barbiato di Belgiojoso, Enrico Peressutti and Ernesto Nathan Rogers. Set up in Milan in 1932, it soon became a vivid part of the modern movement, of which the studio is one of the Italian leaders.

Villa Jucker is located in a valley covered with olive fields between Rapallo and Zoagli in Lombardy, Italy. The building is located 150 m above the sea level. The villa consists of four buildings and a garden. The biggest one is a residential building. The restauration of the building started in 1957. This project by Studio BBPR was carried out in full respect of the existing architecture and of the landscape. The prospect was intact.

The building can be accessed by two separate entrances – one of them at the ground floor level, another at the first floor. The house has no separate rooms; the whole apartment consists of one space. In other words, no solid walls divide the space, except for the exterior walls. The separation of the spaces with different functions was obtained by the use of material, by the position of the furniture and by the structural elements.

The son’s space is located upstairs. It can be divided with curtains into two rooms – containing a living area and sleeping area. Even without the walls, the division is easy to notice – wooden beams, made of rough material, cross over the head of user, marking functions of the space with a great ‘X’ symbol, composing this space with its arms lines. Under one beam there is a low table, supported with a massive stone leg. This table can also be used as a coffeetable, shelf, place for games etc. This table remains to be planned not only as another furniture, but also as an element of structure of the house. It divides and connects spaces at one time.

Furthermore, we can see a large white box with rounded edges standing on the shelf, occuring to be a closet. As a heart of the room, it appears to be more like an artistic object than a piece of furniture. Another way to give a meaning of different function of spaces is distinguishing the floor’s finishings. The space of daily activities is accented with tiles of teal colour covering the floor, while the area of resting is covered with wooden panels. Another interesting example for joining structure, function and furniture is the design of railing, which secures inhabitants. Thanks to two wide planks, it can be used as a bookshelf.

Every opening in the walls of this building is finished with an arc. Large, high windows are preceded with old brick, composed in a regular pattern. This intervention allows filtered light inside, which covers place with checked shadowplay, adding an unconventional pattern to the furniture and the walls.