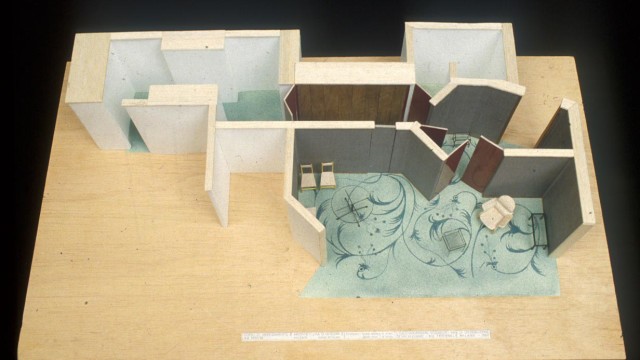 Luigi Caccia Dominioni is an architect and designer from Milan and well-known for reconstruction. He is one of the most influential designers interpreting the traditional architecture of Milan and Lombardy, due to a disciplined approach to reality and attention to the location of the project, the techniques and the materials.

He established a connection between the rigor of the ‘rationalist model’ and the freedom of expression of the organic shapes, without neglecting constant observation in regard to ‘pre-existing environments’.That is visible in the studio.

The layout is linear and very clear, while the green flooring together with the floral pattern represent the organic side of his aesthetic. (The usage of the green coloring is being recognized also on other projects of Dominioni.)

The line of the corridor is underlined by the customized wardrobes, that are maximizing the storage space.