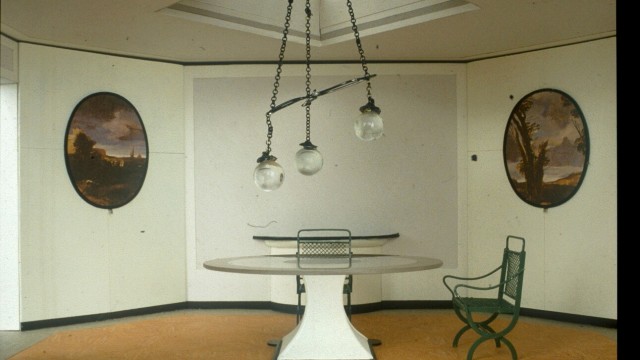 Bassetti’s house is located in an old eighteenth century building in Via Gesu 13 in Milan. Caccia Dominioni task was to redesigning the interior of a building with two blind sides. The “living” house started from the second floor. The ground floor was used as a garage, the first floor for offices and the second and third floor for bedroom and service areas.

But the part of the house we are examining is located on the fourth floor and consists of two different living spaces. The first space is the living room and is accessed through the grand main staircase. The second, used as the dining room, is located on a slightly higher level, which is connected with the living room via a short beautiful staircase. But it’s also directly connected with the kitchen on a lower floor by a small spiral staircase.

It is illuminated at daytime by a skylight glass ceiling and at night by a special luster, designed by himself.  Caccia Dominioni chose for octagon-shape of space and ellipsoidal furniture. He plays with hidden closets and a hidden staircase to create his octagon room.