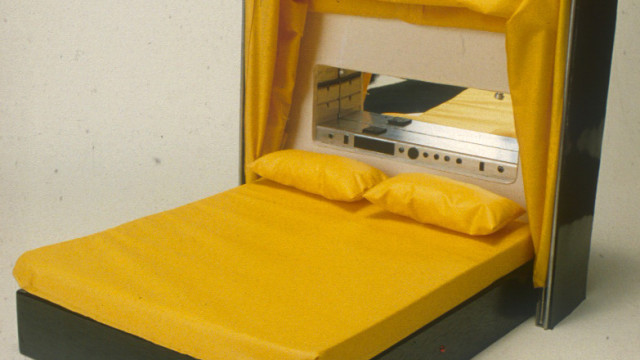 The so-called “living machines” were the fruit of the Colombo‘s research for the new living habitat and his early interest in the concept of “non-furniture”.
„This idea of the convertible space was taken to literal levels in Colombo’s Cabriolet bed which featured a retractable canopy.

The bed’s lighting system which could simulate the day time or the night time conditions, resonates with the idea that the new living environment that needed to work in any setting, including the surrounding space. In the meantime, the bed allowed for its users to enjoy a new level of privacy and convenience, and featured a built-in cigarette lighter, a radio, a telephone and an electric fan.

Colombo combined all of these ideas of machines for living into his Total Furnishing Unit, a large — but theoretically portable — block that comprised kitchen appliances and storage, bookshelves and television, bathroom, wardrobe and a convertable bed. The user had to only plug it in.” (Reference)

The second part of the two coordinated “machines for living” is the kitchen storage unit. Both were designed for Colombo’s private home. The house was initially created for Joe Colombo himself and his wife. It illustrates his great capacity for invention.