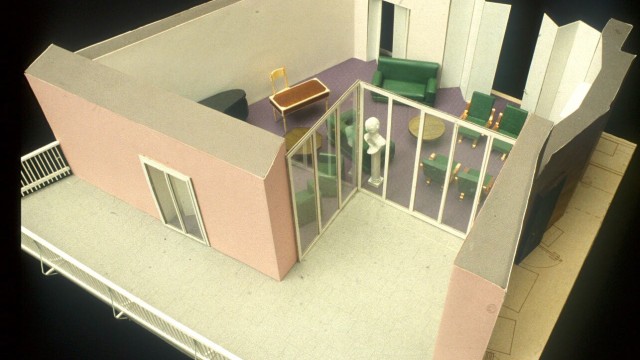 The building in the Via Marchiondi, located in the historic center of Milan and designed by Ignazio Gardella between 1949 and 1954, consists of eight floors above ground and two underground, thus providing housing for fifteen apartments. It hosts the home of the architect on its seventh floor. The façade as well as the interior space are a game between full and empty, responding to a major principle: flexibility. In this sense, the structure is formed by a frame of supporting pillars and by a column of stairs: all interior walls are breakable and the apartments have been designed as so as to offer the greatest possibilities of internal disposition. The apartment of the architect presents two room dividers allowing different configurations of the space.

A tree also grows through the front balconies, epitomizing the union between natural and artificial space.

“The modern flat roof is definitely abandoned in favor of a more ancient pitched one, although modeled by loggias and terraces that accentuate the freedom of the internal spaces. The expressive power of the building arises from the opposition between ‘heavy’ and ‘light’: cantilevered floor slabs project southwards towards the garden from the rear part of the building clad in clinker, they are horizontal lines above which the window frames keep their own rhythm.”[1]