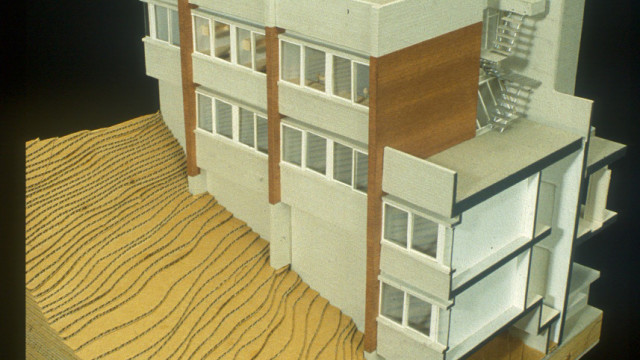 In the early seventies, an expansion plan of the University of Urbino of considerable importance was assigned to De Carlo. The fundamental concept of the plan was based on developing a new facility, not only in the town centre but also in the surrounding area, in order not to corrupt the integrity of the existing building and not to result in the expulsion of the residents. With this in mind, the organisation developed a new university complex expanding on the hill of the Capuchins. The first group (Colle College), built between 1962 and 1966, dictated the guidelines for the further enlargements made between 1973 and 1983: the Tridente College (our analysis), Vela College and Aquiline College.

In our case, the aggregate system of the living cells and the different functional areas are very interesting. They are connected by covered corridors and articulated terraces and staircases, which meet in a central nucleus that is the main space of transit and parking. The overall texture, like that of Urbino, is constant: the materials, the technology, the scale factor and the grain volume. The Tridente College project follows the slope of the hill on which it stands and merges the College and the hill with great precision of exposed concrete and brick.

The top level is the core of common services. From this area, three branches are evolving containing the residential part (including the one that is analysed) in a game of interlocking volumes and paths that are developed around an “internal” distribution illuminated by high skylights. Parallel to it, other bodies are developed that distribute the individual housing units which are connected two by two through the block of the services. The system shell is an integral part of this distribution system and is accessible from inside and outside by its large connected terraces. The rooms of the new college are designed with a design-psychological mechanism that act as a disincentive.