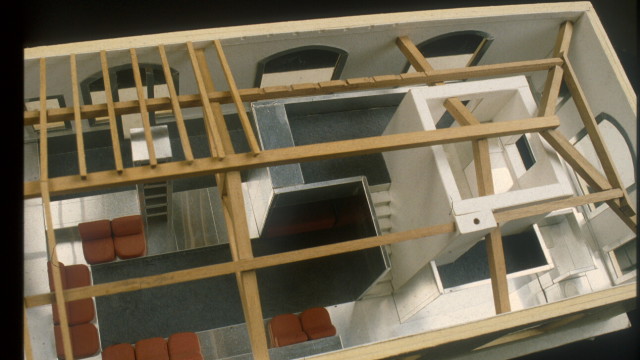 Gae Aulenti (1927-2012) was an italian architect and designer with a wide range of works – private flats, houses, public spaces (piazza Cadorna, Milano, 2002) and museum interiors (Asian art museum, San Francisco, 1986). Perhaps her most known work is the conversion of the Musée Orsay in Paris (1981). From 1965 to 1965 she left an important trace in the influential periodical Casabella. When creating a room, her objective was to make the occupants the focal point of the room.

The apartment is situated on the highest floor of an ancient palace just a stone throw from Santa Maria del Fiore in Firenze. In contrast to the historical buildings with warm red roof tiles, the built-in furniture is made of stainless steel creating a cold modern ambiance. The flat lacks of usual walls. It is divided into two parts by a massive block that rises up above and it even goes through part of the rafter. The inner part is hidden inside the block. The upper part of the block contains a tiny kitchen which is linked to the lower level with a straight staircase. The outlines of the apartment are formed by a narrow corridor lit through large windows, by the bathroom hidden behind the block and by cardboards. These create a solid edge to the core of the space, to the socializing area placed on a slightly lower floor level than the rest of the apartment. All the furniture is bulit-in, even tables are parts of closets. The floor is covered entirely by a grey carpet that complements the stainless surfaces. The only contrast colour in the interior are terracotta red pillows of the sitting furniture.