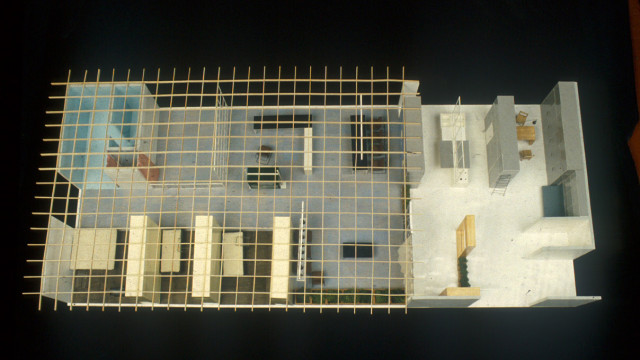 Franco Albini (17 October 1905 – 1 November 1977) was an Italian Neo-Rationalist architect and designer. Through his creations, the modern furniture design merged the Italian traditional artisanship with the new forms of modernism. In his creations, he used raw, inexpensive materials. He exploited the very skilled Italian craftsmanship. This also meant an elegant design based on a minimalistic aesthetics. In the 1960s he worked on industrial design as well as important architectural projects.

Franco Albini introduces the space as a new kind of living. To satisfy the current needs of users, he focused on the entertainment. Areas with special treatments like books, games and sport facilities. As a main identity of the house, a half-open platform is centered. Inhabitants can perform their sport routines as well on beautiful as rainy days thanks to the possibility to cover the platform. This platform is linked to the bathroom to allow people to wash themselves directly.

The common area isn’t defined purposely to give the liberty of use. Different kinds of uses can take place simultaneously. Superfluous furniture frames the space and gives the possibility to this multifunctional atmosphere.The corridor was considered as a useless place. In the attempt to don’t design it, he only implemented it to make te division between the bedroom and bathroom.

Because these are mainly expressed at daytime, the sleeping areas are minimized. A bed, wardrobe and nightstand delimit the space. The wardrobes contain modular elements that can be shaped according the desire of the user. The same ambiance is shared by the domestic’s room, the kitchen, antechamber, and the service entrance.