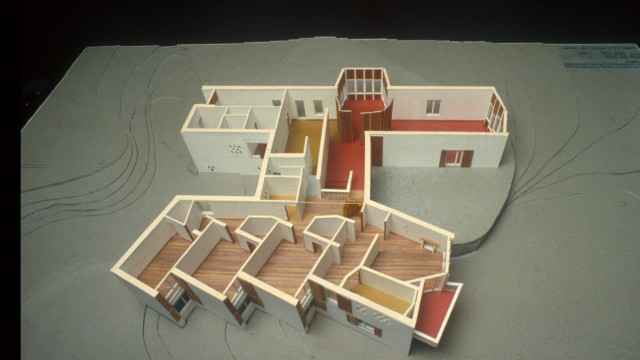 Ignazio Gardella is an architect, engineer and designer from Milan. He was studying at Politecnico di Milano. In 1935 he was working at a restauration of villa Borletti in Milan and it opened his other work. He artificialy created a balance between seemingly disparate elements. He also studied at university of architecture in Venezia and later on he was teaching there. In 1955 he has won the Olivett price of architecture.

The house is built on a big rolling lawn, slightly sloping towards the lake. The interior, taking advantage of the unevenness of the ground, consists if three staggered levels: a first floor at the level of a plan d’igresso patio, with the atrium and l’apartmento guests. A second floor at a height of 1,25 m on first with salt and services and a third floor, high m. 1.25 for the second bedrooms.

This distribution allows a passer atrium in the entrance floor, with views l’immediato dela lake and also allows the direct connection between services without crossing the atrium. The articulation of the plant creates two external environments: upstream entrance and a patio, to the floor of the rooms, a patio dominated by a large cherry, opened towards the lake. Then multiplies the visual from inside the house: in particular the offset of the bedrooms to each of these gods, as well as the view of the Lake and the orientation to the east, a private outdoor space with no other views.

The atrium entrance and joined at the level of salt from a short, large scale. Accentuating the sense of continuity of the treads of the staircase just coated the same majolica tiles that pave the two environments. Wanting to get in some environments (dining room, living room, bed room of the parents) continuous panoramic views without resorting to large glass panes, you are taken to the wooden walls with doors and windows closed continuous arranged at different levels: some Lanai to alteza usual , others very low so that sitting see the lawn outside. These wooden walls, divide into full height and determine the divisions between the living quarters. The construction and masonry. The exterior doors are vernicati white spruce, the antoni and the first glass walls in Pitchpine polished natural. The service window are formed by a grilling in the wall, which functions as a safety grid.