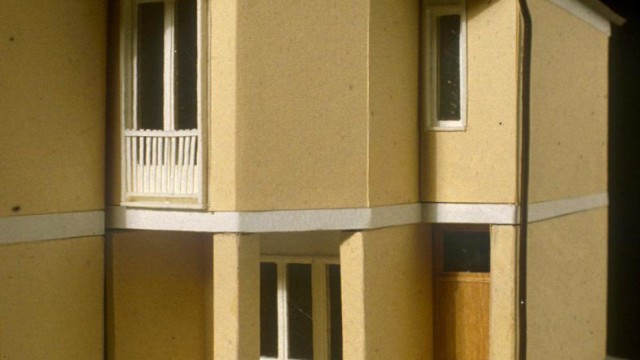 The construction of the popular neighborhood of Cesate is among the most significant episodes of the first seven years (1949-1956) of the program “INA House”, where the city of Cesate commissioned a group of renowned professionals – three BBPR (Lodovico Belgiojoso, Henry and Peressutti Ernesto Nathan Rogers), Gianni Albricci, Ignazio Gardella and Franco Albini – to project a new extensive settlement, in response to the high demand for housing resulted by a massive immigration.

Franco Albini took personally the entire design process of the single-family residences, and managed to replicate it in some lots located in the district. Beyond the partially bankruptcy of the construction’s project of the new district as a whole – the reduction of the construction area from 33 to 20.5 hectares and the poor quality of the materials used – the project of Albini and BBPR is one of the most successful in the entire program.

Built according to the solar light, the two ranks converge towards the north, where a continuous arcade unites and ideally closes the courtyard, characterizing the different roles of the open spaces: the public character of the central space, and more intimate spaces behind that, divided according to the succession of the individual units, which are intended to be private gardens.

The demand for liberation from the orthodoxy of an international modernist language, specifically formulated in the manuals “INA House” and by the scientific committee, is seized by Albini as an opportunity to develop a totally original project: each row does not end in the approach of identical “cells” but is the outcome of the ”interpenetration of volumes and surfaces” (Fagiolo, 1975). Planimetrically based on a diamond, each unit is set near it’s neghbor assuming a “L-shape” format, which guarantees the double facing living room, located on the ground floor.. The distribution of the sleeping area is made from a central hallway which is accessed by a spiral concrete staircase, set on the lower level in the hub of the living room.

Albini also makes an interesting relationship between interior and external spaces: the diamond-generating plant allows a succession of volumes orthogonal penetrated and a rational constructive regularity. On the other hand, there is a fully different character in the front area: the communal courtyard acts as a filter to the eye of the passer, while a large terrace leans forward to allow the contemplation of greenery.