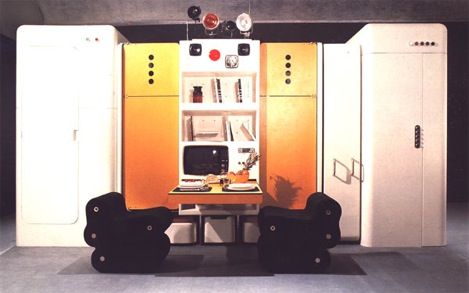 Joe Colombo was regarded as one of the most far-sighted Italian designers in the 20th century. After painting study at the Accademia di Belle Arti di Brera, he continued his further education of architecture in Politecnico di Milano University. As a pioneer of Retro-futurism of which the design style was presented as the simulation of the early art to the idea of future design, most of the works of Joe Colombo were the combination of retro-style and future techniques. His design concept could be described as “The future as seen from the past and the past as seen from the future”.

The Total Furnishing Unit was a homogeneous living system that contained all the personal necessities of daily life by creating a seamless environment. A bedroom, a bathroom, a kitchen and a private space were functional integrated in the unit. A cupboard and a dining table were “hidden” in the structure with the function of both keeping private and saving space. Old lights collected from abolished cars were planted on the top of the unit for lightening, which contributed to a sustainable environment. In the unit, yellow, white, silver and other small pieces of colors can be found, conveying a combination of contemporary era and future techniques.

Though smoothing lines and the layout, the total furnishing unit can be described as a logical and scientific design. The unit presented a concept of the modern loft by every space area could be modified and moved based on user’s own necessity, showing a great flexibility. In Joe Colombo’s idea, the romanticism of the self-contained pods can be accurately expressed by shifts in human lifestyle. That was why he preferred to call his works equipment instead of furnishings. As he said, traditional families were tending to require a living and working space for meditation and experimentation, to intimacy and to interpersonal exchanges.