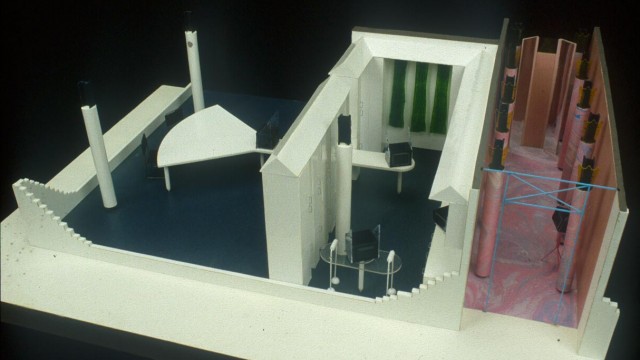 Born in Bussi sul Tirino in 1938, Ugo La Pietra lives and Works in Milan. He graduated from Politecnico in Milan in 1964, in a period of intense experimental activity during which he made significant contributions to radical design. The observation of cities dynamics allowed him to develop his research on the relations individual / environment and to address the need for a conquering of the urban territory through an individual experience.

La Pietra developed the concept of the Casa Telematica in 1971, a project he first presented in MOMA’s New York 1972 exhibition “Italy: The new domestic landscape”.

The house was divided in traditional spaces, but featured video terminals everywhere. It consists of a living-room and a kitchen. The former is almost completely filled by a triangular table ending in a board which leads into the kitchen. Opposite this board are four chairs side by side. A TV-set adorns the table facing the chairs so that everyone can enjoy the programs while having dinner. But the pleasures of watching television are not restricted to dinner time. While the cook chooses today’s recipe from the culinary database of the kitchen computer, the others play their favorite video game or watch an exciting movie. Monitors and terminals are everywhere, allowing the whole family to make their choice from the programs offered.

In 1983 La Pietra re-launched his project during the Milan Trade Fair coming up with a house loaded with appliances and video screens.

“What I want to show is not only the house of the future, but a house where computers and communications triumph”, La Pietra stated about his project.