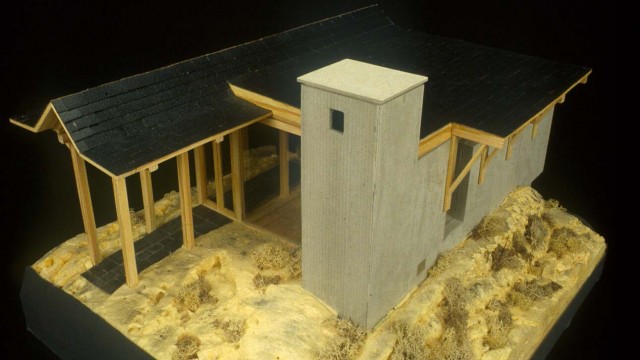 Villa Busk is one of those architectures exemplary rigor, coherence and poetry of which it is impossible to return the atmosphere and emotion space only through words or images. It may therefore be interesting, in this context, try to alternate the rigorous and objective description with some more personal considerations – the same Fehn or writer – useful to clarify how an architecture brought by the strong narrative is able to build in the user suggestions, “in turn, delineate further the plot of the stories.
The house built by Sverre Fehn on rocky ground a few hundred meters from the sea along the southern coast of Norway in about three hours drive from Oslo, is presented to the visitor as an elongated volume, just one level.
“The main volume is intersected at the entrance to an orthogonal axis, oriented NW – SE, the ends of which are held on deposit volume outside the tower and connected by covered bridge.

From its very first and brief description of some of the terms emerge – bridge tower – which seem to belong to architectures of the past. It is no coincidence Fehn loves to tell, in this regard, the relationship that existed between him and the young daughter of the buyers. The child, perhaps frightened by having to move house, he continued to judge “bad” the new house. Therefore, during construction, Fehn decided to make a pact with the small promising to only build for her a secret place, making it well-disposed towards the new building. “>Well, with great satisfaction, the architect said that, in the end, it was not made any magic room and, above all, the child has never claimed to find it.
Assumptions inherent in the project was therefore the desire to build a house, “normal”, a spatial structure that can quickly become part of everyday life of its owners. “>In this way, elements formally belonging to evoke tradition, although according to a new language and contemporary, the continuity of its content of living.

The house settles on the lot chosen by the designer and sheds light on the physical, morphological and material : the natural elements already present and characterize the site – the six large trees, rock outcrops , the sudden altitude towards the small valley with a creek at the bottom – they become an integral part of the project. The new article reveals and clarifies the place : the ground is just caressed, tamed by the architect who , in building , interwoven with the surrounding dense dialogue , aware that the traces left by man, although modifying the environment , become precise guidelines for who is going to live there . The architecture for Fehn helps to clarify the nature , he argues that without the intervention of man , nature is not visible or knowable. This attitude is something quite different from a misunderstood than “green” as explained by the same architect : The steps are in the nature of a kind of architecture , because they convey the feelings of one who walks in the landscape and tell those who come after him which path he liked the most. It ‘s like a letter addressed to the next traveler . But at the same time it destroys a part of nature .

The awareness of being literally led by the hand into the architecture is a feeling that has tried myself during a long afternoon spent studying and Fotografar
and home. On that occasion it was the presence of a cat – the cat hosts – left free to come and go from the house to reveal the relationship that is created between the viewer and the built space. In fact, compared to men who are restricted in their movements and which are necessarily have to follow the paths drawn by the designer, the little feline was free to jump from one place to another and, above all, to peer at a safe distance the hecklers inappropriate . He could climb onto the roof, along the sills outside in balance, crouch above the cabinets to follow every small movement of the guests. This made me realize that just such an animal with such potential was able to build themselves a vision of space. But man, despite the apparent freedom granted to him by the designer, in a composition so simple and thin, is headed toward paths, cuts and prospective visions desired by the architect. Fehn puts on every little detail of the space, preparing for the user, with known physical characteristics, specific “traps” space, where every small detail is part of the largest consultation he desired.

Access to the house is on rocky ground along a diagonal axis paved with slate, proceeding from north to south, continues and emphasizes the direction of the path of access by road. “>This ramp, with a slight slope to climb towards the building, back down at the end with a few steps accompanying the visitor diagonally below the wooden porch between the volume of external storage and the entrance to the house.
Villa Busk is characterized, on this side, a front light, glass, dominated by the beat of the slender pillars of pine. “>A long platform planks of wood, raised from the ground, emphasizes the inner portion of the house and supports two volumes covered with pine slats placed vertically (lowered compared to the eaves), which act as service lockers for the interior space of the corridor.
Inside Fehn just does not seem to want to give form to the function but rather, space through form, getting a personal psychological view of living: the buildings made from animals are rational, precise and immutable ….; human thought is not strictly personal and logical, includes jokes, lies, irrational whims. Yet the planimetric composition is rigorous and compelling: runs orthogonally to those who enter a double structure of slender pillars pine that identify the “internal”, Slate as the external ramp, which is also characterized by the double pitch roof with chain-readable from the intrados. This glazed space connects tangentially to the nature of the different places of this part of the house, as well as mediate the relationship between the domestic interior and the surrounding nature. These functional areas are arranged, from NE to SW, according to a logical sequence that proceeds from the “water” (the tank) to the “fire” (the fireplace): extreme places architecturally identified by the two “aspects” of the large concrete wall to “>face view that closes the house towards the valley.

“>It is no coincidence that along the outer ramp to the house the visitor pointing to the fireplace, “place of fire”, which marks the south, to the memory of youthful experiences Fehn, an element of attraction and catalyst.
The façade of the house towards the valley is instead characterized by the development of the vertical tower of the bedrooms of the children and the study of Mr. Busk as opposed to the performance of the horizontal compact body upstream. The tower fact accentuates its verticality, as well as for the presence of the cylindrical body of the angular scales, also thanks to the arrangement of the tables of external coating in red pine Shot, while the statement that opposes shows a strong character of horizontal stratification of the elements. The continuous casting of the concrete wall is attached directly to the bed of rock outcropping rock as if it were itself, thus becoming the basis for the heavy wooden roof and overhanging slate which rests on slender wooden structures inside. The horizontal line of the shadow emphasizes and enhances the performance of the interior of this part of the house. “>The body of the house is joined to the tower through a bridge made of wood and glass that accentuates the gap between the two parts of the house, leaving the viewer “suspended” on nature.

Villa Busk therefore not intended to represent an ideal model of housing, it materializes rather a clear program of life of clients . The house is modeled on the expectations of the young family , emphasizing those aspects most intimate and most social . Not surprisingly, as well as the location of the water turns an environment where the private bathroom in a room where you can gather with close friends , so the bridge materializes the desire to preserve the delicate growth of children preparing for their independent and autonomous spaces .
During the visit to the house I was greeted by a sweet music that , from the entrance, spread throughout the house , flooding the living room, the kitchen, the bedroom of the parents. When he reached the bridge , intending to climb to the study through the spiral staircase , I lost contact with the music. I realized that the bridge represented therefore not only a psychological limit , but actually in the physical separation between the different parts of the dwelling . I was then sitting cross-legged in the middle of the glass bridge , respectful of that sign , hanging on the lush vegetation and rugged rocks , listening to the last notes of the melody , knowing that maybe , even that was not quite usual , was part the plot written by Fehn.