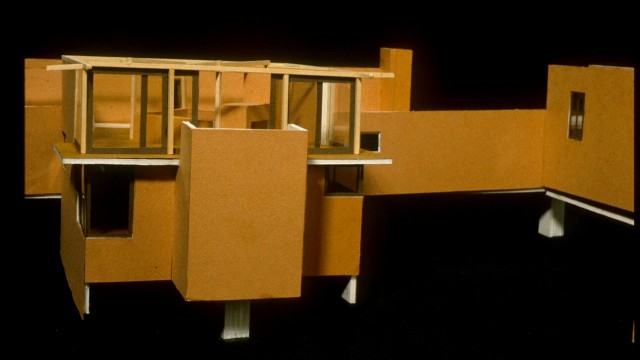 Sverre Fehn (1924-2009) has long been recognized in Europe as one of Norway’s most gifted architects. Categorized as a modernist by most architectural writers, Fehn himself says, “I have never thought of myself as modern, but I did absorb the anti-monumental and the pictorial world of LeCorbusier, as well as the functionalism of the small villages of North Africa. You might say I came of age in the shadow of modernism.”

Born in Kongsberg, Norway in 1924, he attended the Oslo School of Architecture and received his degree in 1949.

Fehn, along with Norberg-Schulz, Grung, Mjelva and Vesterlid, all other Norwegian architects of the same generation, and Jørn Utzon  formed an organization which was the Norwegian branch of CIAM (International Congress of Modern Architecture), called PAGON (Progressive Architects Group Oslo Norway) that had a profound influence, creating architecture which had a firm foundation in the Modern Movement, but was expressed in terms of the materials and language of their own region and time.

Fehn received the French State Scholarship which allowed him to live in Paris in 1953 and 1954. In reminiscing about that period, Fehn recalls that it was his generation that distanced itself from Le Corbusier and his urbanistic world.

When asked what the most important part of his architecture is, Fehn has replied that it is above all, the construction, be it wood or concrete, and harmony, rhythm, and honesty in the use of those materials. He calls the act of building brutal, and elaborates.

His Glacier Museum has been hailed as a major landmark in contemporary architecture. The museum is the center of a panorama formed by the steep mountainsides and the fjord with the glacier on top.

In 1971, he became a professor of architecture at his alma mater in Oslo, where he taught until 1993. Fehn has lectured extensively in Europe; including Vasa University, Finland, Denmark’s Architectural School of Aarhus, the Stockholm Architectural Association, the University of Trondheim, the International Laboratory of Architecture & Design in Urbino, Italy, the Architectural Association in London. He has also lectured in Paris, Stuttgart, Germany; Barcelona, Spain; and Rome. In the United States, he has been a guest lecturer at The Cooper Union in New York City, Cranbrook Academy of Arts in Bloomfield Hills, Michigan, Massachusetts Institute of Technology, and Harvard, Cornell, and Yale universities.