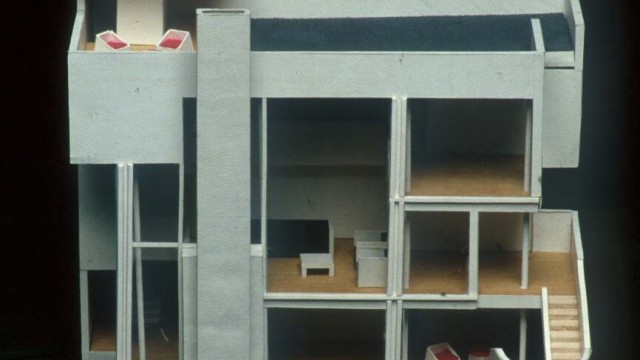 To give some context to the architect, Richard Meier was born in 1934, and was one of the five leading avant-garde architects in the 1960s, along with Charles Gwathmey, Peter Eisenman, Michael Graves, and John Hejduk. The Frederick J. Smith House was one of Meier’s first largely-recognized works and was part of a series of single-family homes that mark a first-step in Meier’s work. It won numerous prizes shortly following its construction. In 1968, one year after it was constructed, it won the AIA National Honor Award, the AIA New England Award, the AIANY Award, and the AIA National Award. Later, in 2000, it received yet another award, the Twenty-five Year Award from the American Institute of Architects.

This house is part of a series of houses that mark the first rationalistic stage of it’s architect. It is inserted into the natural landscape on a wooded hillside sloping toward the water, but designed as an artificial object.

It’s main purpose is to create a strong visual contrast with it’s environment. It is designed by carving the house out of a basic cubic base with operations of addition and substraction.

The architect organizes the floorplan by zoning, a characteristic of his first houses. The bedrooms and private areas are located in the closed rectangular prism, while the service, social, and entrance areas are located on the open ground floor.

The rear facade facing uphill is wrapped in opaque walls with only small, geometrically arranged openings for windows to protect the occupants’ privacy. The social areas are all located toward the front of the house, where the large glass panes open laterally, facing down the hillside. In some spaces, the height of the rooms in the front area can reach two or three stories, and the extreme height contributes to the dramatization of the interior space. The curved staircase that descends from the first floor to the ground, the small reservoir cubic annex and the access ramp to the house, being additions to the central cubic volume, serve as anchor points for the house.

Finally, it’s structure, although thought it is made out of concrete, it is actually made of wood and glass.