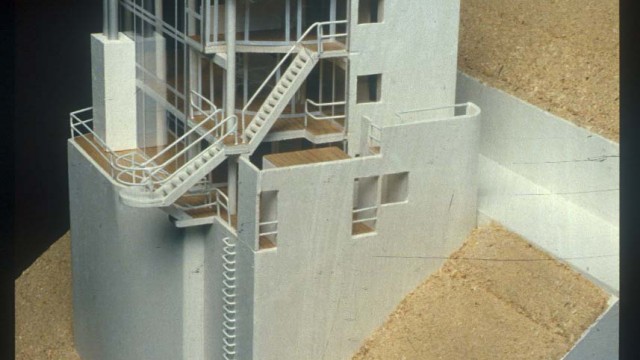 Richard Meier (born October 12, 1934) is an American abstract artist and architect, whose geometric designs make prominent use of the color white. A winner of the Pritzker Architecture Prize in 1984, Meier has designed several iconic buildings including the Barcelona Museum of Contemporary Art and the Getty Center in Los Angeles

The Douglas home is the culminating work of the first period of Meier, where all the ideas developed in the experiments in single-family homes resulted in a more balanced and imaginative structure. It is also part of the rationalism designs he made.

Being an artificial construction inserted into the natural landscape, it becomes quite a contrast for any viewer. The shape is a large white prism that emerges from between the trees. The back of the house is a closed facade with small openings, while the front features with large glass panels offering extensive views over the horizon, making a full continuity between interior and exterior in the living plane.  The shape and arrangement of the windows are in strict compliance with the privacy required in each area of the home.

In this house, Meier proposes formal, space-rich compositions. He organized the internal space such that the small, tight main entrance opens into a large space encased in glass. The “public” zone of the house, including the living room and dining room, faces Lake Michigan and gives the impression of a completely different place when compared to the deceiving one-story entry space.

This style allowed him to express various themes: the contrast between light and shadow, the change in spatial scale, and access via ramps, bridges and stairs. Circulation through the house is primarily horizontal with the open floor plans except for two staircases, one interior and one exterior, on the corners of the house. Their placement was intended in order to not interrupt the horizontal views towards the outdoors.

As is typical of Meier buildings, the house is completely white made with reinforced concrete and glass except for two steel pipes that extend from the chimney up to the roof, framing views at the entry level.