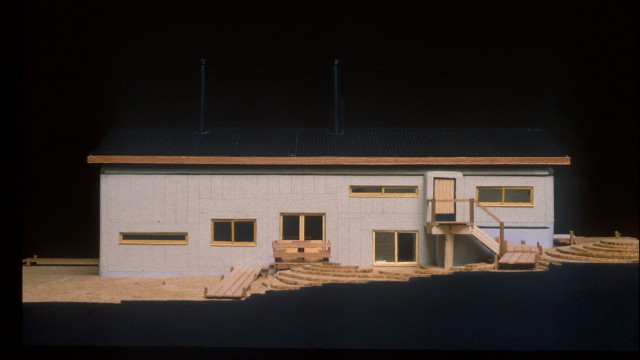 Close to the Royal Castle of the Swedish Royal Family in Drottningholm the home and studio of the British Swedish architect Ralph Erskine and his wife Ruth was completed in 1963.

The house consists of three parts that are grouped around an atriumlike inner courtyard with trees and benches. The living space is oriented to the east and the north is protected by a covered veranda from views from outside. Garage and atelier are located in the southwest/west and are therefore the closure of the complex.

The house is designed strictly in the brutalistic style, the asymmetric placing of the windows gives an idea of the influence of Le Corbusier. The outer walls consist of aerated concrete elements that has a sample of grooves. Over the roof there’s another roof floating, a saddle roof, covered with black corrugated iron which is responsible for protecting against rain. Unfortunately, this construction didn’t work well all the time with Swedish climate.

The construction contrasts extremely with all building around which are mostly from of time of Gustav III. The ground-plan is kept in an airy and open style. Coming from the entrance it’s easy to get an overview over the whole house. The different rooms for different purposes are arranged according to the “space in space” principle, more than 4 m in height. The different areas can by reached via stairs and landings. The living room with its big windows to the south and southwest is dominated by a round open fireplace which is located in the middle of the room. Small slits in the windows effect interesting light effects.