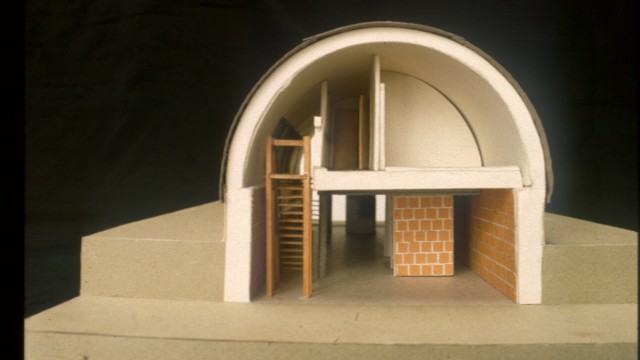 He is a french architect and designer. He studied at the Ecole des Beaux-Arts in Paris (1900– 08). His first major design was an office–library for the Pavillon de la Société des Artistes Décorateurs (of which he was a member from 1923 to 1932) at the Exposition Internationale des Arts Décoratifs et Industriels Modernes (Paris, 1925).i In 1928 Chareau worked, in collaboration with the Dutch architect Bernard Bijvoet, on two architectural projects.  In 1931 Chareau joined the Union des Artistes Modernes, a Paris-based group of artists, designers and architects, exhibiting with them annually until 1937. In 1940 he emigrated to the USA and was soon known in the artistic circles of New York. One of his last works was the studio (1948; destr.) in East Hampton, NY, for the painter Robert Motherwell, constructed from American army surplus materials.

This house was built in 1948 for Motherwell in the Hamptons, USA.

Motherwell’s house has some similarities with other earlier Chareau’s projects. For example, he worked with industrial elements as in Maison de Verre, but this new house was more rudimentary and designed out of immediatly necessity and there’s no extra budget for the elegant details that Chareau used in the Maison de Verre.

Chareau took a military air shed structure and used it as a roof and main structure for this house.