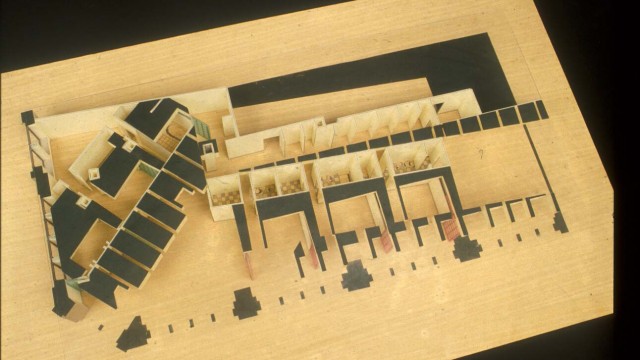 Peter Eisenman was born in Newark, New Jersey in 1932. He studied at Cornell and Columbia Universities and then at Cambridge University in England. Eisenman also taught at Cambridge, Princeton and the Cooper Union in New York.

Tom’s Loft it’s a reconstruction project that involves a 4,000 square foot loft in the neighborhood of Cast Iron in Downtown Manhattan. One of the exterior walls is bounded by Broadway on the short side, so that changing the regularity of the plant almost rectangular loft. The basic idea is similar to the design of the Wexner Center of Visual Arts at Ohio State University, and it corresponded to the will of producing disoriented relations between the new and the old: in both cases, the context is characterized by an irregular angle from which Eisenman was inspired to layer two different geomterie “used in a way that neither of the two alternatives is dominated horizontal in size, neither in vertical. The objective is to produce the “displacement” and the destabilization of the conventional mode of orientation. In Tom’s Loft disorientation is exacerbated by ‘insertion’ of a foreign body in the context of pre-existing. The complexity of the relationships between the various rooms is “destabilizing” for the guidance of one who is all inside, both with respect to the rest of the city, both with respect to north-south coordinate. Each system risce not to become a dominant order, but is interrupted and fragmentary made by another system. No order can impose up to stifle the other, they are on an equal footing, and just as equally lascianotracce himself on the ceiling, the floor and walls.

“In a certain sense there an order in the order, and a scale in the scale.”

“The spatial structure of the loft is decodificable at each point as one of the fragments of visual interaction. The entire space becomes the fragment, a rare and isolated, in a large context , and usually invisible, vectors, streamlines and messages coded ”