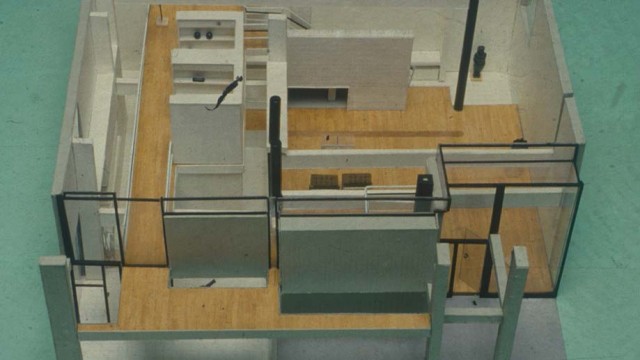 House I was an effort to conceive of and understand the physical environment in a logically consistent manner, potentially independent of its function and meaning. Is an understanding  of the nature of the structure in opposition with the form to function or of form to meaning

About the spatial organisation there was an attempt of control precisely the logical relationships of forms so that they would produce a set of formal relationships between form and space.

There were three steps in the process. First show a distinction between two aspects of form, the ones who respond to programmatic and technological requirements and the those which relate to a logical structure. In order to make this distinction, an attempt was made to reduce or unload the existing meaning of the forms. Second, a formal structure was made from these marks in the actual environment. Third, this formal structure of marks was related to another formal structure of a more abstract and fundamental nature.

Formal relationships as the juxtaposition of solids, voids and columns gives us cues to entry, sequence of movement, the relationship of open to closed space can also exist at another level far from the senses, a level which though not seen. Thus there is no reason or meaning intended in the use of particular strategy, there is a  potential capacity of the logic to provide a space of hem meaning.