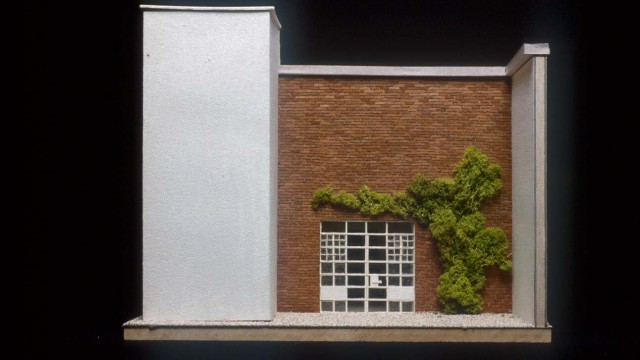 Michael Graves was an American architect, identified as one of The New York Five. His contemporary building designs and some prominent public commissions became iconic examples of postmodern architecture, such as the Portland Building and Denver Public Library. For many Americans, he might be also best known as the designer of household items.

In the 1970s, Michael Graves bought the “ruin of a building” in the middle of a residential block in Princeton. He appreciated the building’s Italian heritage, and this one had been constructed in a Tuscan vernacular style in the 1920’s. Divorced and on his own, Graves renovated in stages as his residence, converted the truck dock into an entrance courtyard, replaced the hand-crank elevator with a stair, craved new openings for windows and doors and removed 44 storage cells to transform the house into an orderly sequence of well-proportioned rooms.  Graves often considers the 7000 square foot Warehouse as a “laboratory” for experimentation with ideas about domesticity, where architecture and artifacts come together in well-appointed interiors. The house is carefully furnished with his extensive collections of books, art, furniture and objects, combining antiques with his own designs.

Although The Warehouse renovation is basically finished, Michael continues to make changes. He was stricken in 2003 with a spinal disease that resulted in lower-body paralysis, and he is now restricted to a wheelchair. Undaunted, he added an elevator and redesigned his upstairs master bath to accommodate his wheelchair.