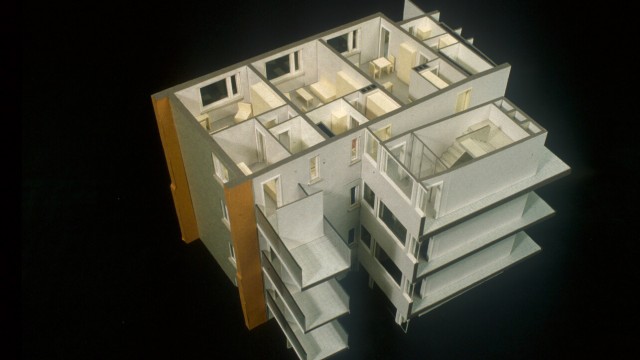 Since its inception West Germany was determined to frame your own housing development in the Western cultural context . The exhibition , whose theme was ” Stadt der Morgen ” ( The City of Tomorrow ) , sought to bring to life the inhabitants in the city center without giving up ” light , air and sunshine .” The exhibition was to play a fundamental role in terms of propaganda , as it was supposed to represent a summary of the debate concerning the function of modern urban residential , deliberately opposed to the huge prefabricated building blocks that East Berlin was doing in those years on Stalinallee . The Hansa district had to be the example of modern living , with buildings of various styles , green, school, library, church , commercial area and the nearest U- Bahn , to show that the welfare of the Western system led among citizens. For the implementation , carried out in 1955-1957 , they were invited to West Berlin architects of international renown , especially Aalto, Gropius and TAC , Niemeyer , Le Corbusier , Luckhardt , Baumgarten , Eiermann , Baldassari , Van Broek + Bakema , M. Taut , Jacobsen and Luciano Baldessari too .

In the tower at cheap apartments built by Luciano Baldessari in Berlin ( 1958) , on the occasion of the reconstruction of the war-torn Hansa Quarter , the apartments are gathered in the East and West in two angled blades white , apart from the staircase and elevators and tested North and South in cas to view with balconies and voids that allow for maximum ventilation and light to the interior.  Several brightly colored floors and walls enliven the central studios of 36 square meters and housing angle of 56 square meters with two bedrooms and a living-dining -through .