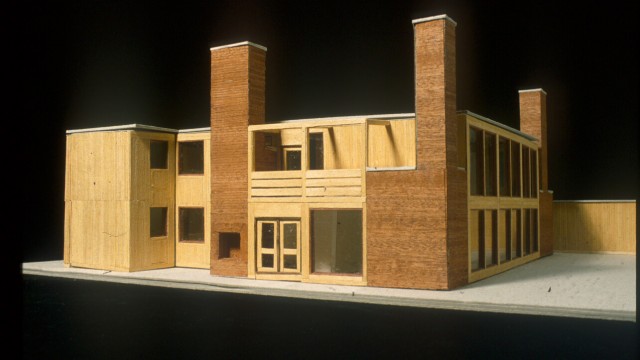 Louis Isadore Kahn was an American architect, based inPhiladelphia. After working in various capacities for several firms in Philadelphia, he founded his own atelier in 1935. While continuing his private practice, he served as a design critic and professor of architecture at Yale School of Architecture from 1947 to 1957.

A few months before his death, the architect Louis I. Kahn completed  Steven and Toby Korman’s commission to design a six-bedroom house in Fort Washington, Pennsylvania. The Korman House represents Kahn’s unconventional and enduring vision of the American country home.

The Korman house is the largest and most glamorous of the private homes Kahn built, with nine bathrooms, six bedrooms, and a two-story, glass-walled living room. The house is a showcase of exquisite materials, with its exterior made of cypress, glass and brick, including three 30 ft. brick chimneys, as well as a concrete foundation. The interior is composed of douglas fir beams, white oak, and pine ceilings.

The entry hall’s focal point is it staircase; beams of douglas fir extend from the basement to the second floor, elegantly defining the space. A left turn from the entrance leads into the living and dining spaces. Instead of giving us the sense that we’re traveling deeper into the house and further from outdoors, entering the double-height room brings us back to the land: floor to ceiling windows reveal the open field behind the house, fully visible for the first time. In the living room there is privacy, but also a feeling of openness: the room isn’t closed off from the larger living area or the outdoors.

The second floor has three bedrooms for the Korman children, plus an identical guest room, each one with separate bathroom. Across the stair hall is a large master bedroom with its own fireplace.