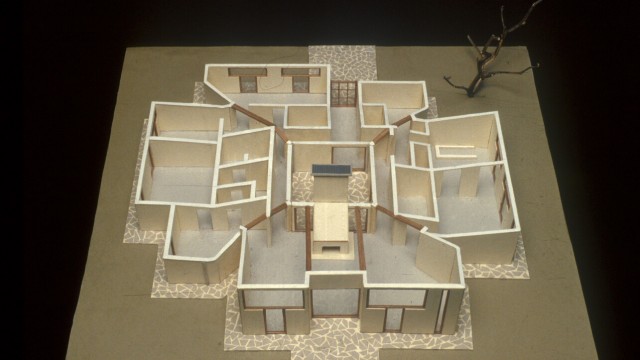 Louis Kahn (February 20th 1901 – March 17th 1974) was born in Saarama (Saaremaa), Estonia. University of Pennsylvania with a thorough grounding the the Beaux Art school of architecture.

He was one of the United States’ greatest 20th century architects, known for combining Modernism with the weight and dignity of ancient monuments. Though he did not arrive at his distinctive style until his early 50s, and despite his death at the age of just 73, in a span of just two decades Kahn came to be considered by many as part of the pantheon of modernist architects which included Le Corbusier and Mies van der Rohe.

This villa project from Louis Kahn stayed only an idea as it was never built.
But it marks a new and interesting approach about form, as Kahn tries to apply the diagonal as a formal limit in the floor plan arrangement. Along the diagonal the orthogonal structure receives incisions in its outer contour. The spaces develop around a central interior court with a corridor. The rooms are ordered functionally. The service rooms with skylights are arranged around the center, while living and bedrooms are located in the facades. Also there is a diagonal separation of bedrooms on one side and living spaces on the other.
The outer rooms have higher, single-pitch roofs so they get sunlight from above and the diagonal appears again in the roof. Therefore the concept leads to be quite dynamic in comparison to the stiff building figures of this phase.
It is very interesting that seen from inside the diagonals are only apparent in the roofs. Its more the orthogonal wall-order which dominates the special feeling. As well as the almost omnipresent natural lightning from above.
The intent of Kahn to create an interesting façade by playing with open and closed walls is visible in the reuse of the keyhole window of the Greensburg press building in this design idea.