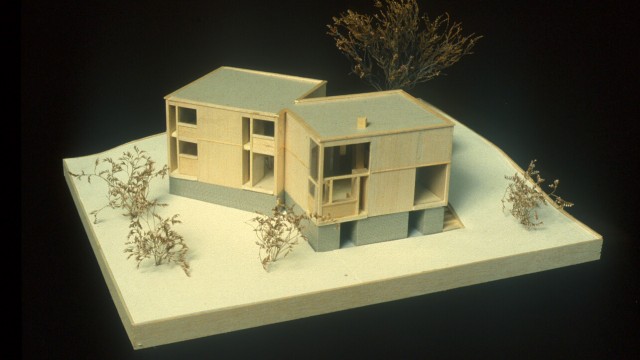 The Fisher or also Norman Fisher House was built for Dr. Norman Fisher and his wife on the outskirts of Hatboro in Pennsylvania from 1960-1967.
The Fisher House expresses Kahn’s idea to create two cubes, one for the served space, which means the living room and the other as the serving space with the bedrooms. These two cubes merge on one angle which seems to be accidentally chosen, creating a dynamic figure.
The private is orientated north-south and the public, rotated 45 degrees, northeast southwest along the driveway. The second volume holds the living, dining and kitchen space in a double height room. As Kahn wanted to aim a communal experience of space there is very little distinction between the spaces dedicated to these three rooms.
The foundation of the home is built entirely of stone, as the house is on a slope and needed a basement. Kahn originally planned on an all stone construction but had to choose a cheaper wood construction. The use of cedar wood for the interior and exterior of the home finally made Kahn create beautiful details in the building simply by folding windows into the building envelope and by designing special windows to provide new habitable space like benches, shelves and wardrobes on both the interior and exterior of the building. Also the wooden walls create a warm and homely atmosphere. On top of that the deeply recessed windows allow light in during winter and keep out direct light in summer.
In the Fisher House, Kahn does not follow the linearity of the modern plan but focuses on a simple geometry, allowing the cubes to provide a separation of public and private space. It is one of the clearest examples of Kahn’s unique architectural style at the time.