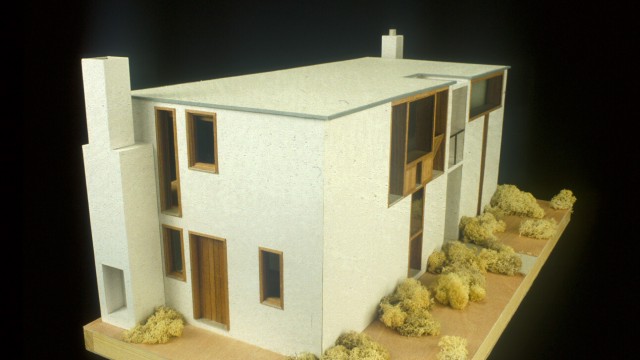 The Esherick House in Philadelphia, Pennsylvania, is one of the most studied houses designed by American architect Louis Kahn and was commissioned by Margaret Esherick, it was completed in 1961.

Louis Kahn’s work infused the international style with a fastidious, highly personal taste, a poetry of light. His few projects reflect his deep personal involvement with each. He was known for his ability to create monumental architecture that responded to the human scale.

He was a close friend of Wharton Esherick, Margaret’s uncle, for whom he designed a studio that is now part of a National Historic Landmark. Joseph Esherick, Margaret’s brother, was a leader of the architectural firm that completed Kahn’s schematic design for the Graduate Theological Union Library, now known as the Flora Lamson Hewlett Library, at the University of California, Berkeley, after Kahn’s death.

The house is most recognized for its spatial organization and for the ventilation and natural lighting managed through the special window and shutter configuration. Kahn often divided his buildings into what he called served spaces (primary areas) and servant spaces (corridors, bathrooms, etc.) The Esherick house is organized into four alternating served and servant spaces, which in this case are parallel two-story strips that run the full width of the house between front to back. Most of its front wall is occupied by a built-in bookcase (Margaret Esherick was a bookseller) that reaches up to the horizontal window at the second story. The side wall contains a deep fireplace. Each side of the house has a window and ventilation configuration that is distinctly different from that of the other three sides. The insides of both the front and rear walls of the living room, dining room and bedroom are lined with bookshelves and other structures that create an effective wall thickness of over two feet (60 cm). The resulting deep window recesses have a moderating effect on sunlight and ventilation.
A kitchen of wood and copper was created for the house by Wharton Esherick, a nationally known craftsman and artist.
The single-bedroom house is a flat-roofed, rectangular concrete solid with stucco facing. Kahn designed an addition to the house in 1962-1964.