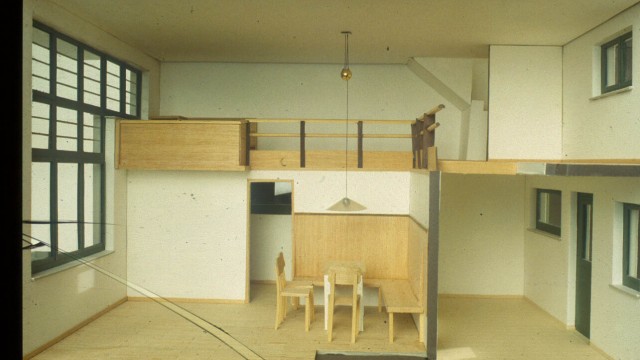 “Despite early criticisms of the Werkbund as merely fashionable and wasteful, Adolf Loos agrred to take part in the 1932 exhibition to design a row of houses for working class housing. The exhibition was designed to show ‘the maximum exploitation of space“. Loos had been appointed as chief architect for the housing department of the city of Vienna in 1921 but resigned in 1924.

The Werkbund houses account for two pairs of semi detached dwellings, although small still display Loos characteristics in the form of the double height living and dining space overlooked by a gallery with study desk. There are bedrooms on the top floor with a large balcony to the front aspect, and a cellar at basement level. The utilitarian appearance with flat unadorned surfaces, large south facing windows and cubic volumes were common themes and aesthetics at the exhibition.

The design is based upon the Scheu house of 1912 which was conceived as a series of interconnected volumes or spaces with the main stair housed in a large high ceilinged hallway and roof terraces outside the bedrooms on the upper floors.”