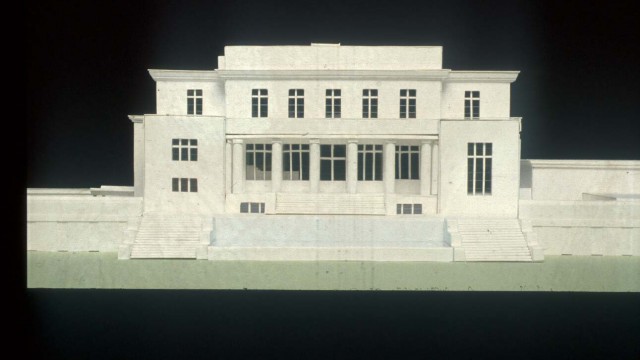 Adolf Loos (December 10, 1870 – August 23, 1933) was born in Brünn in the Austro-Hungarian Empire (now Brno, Czech Republic) in 1870. He was one of the most influential European architects of the late 19th century and is often noted for his literary discourse that foreshadowed the foundations of the entire modernist movement. As an architect, his influence is primarily limited to major works in what is now Austria and the Czech Republic, but as a writer he had a major impact on the development of 20th century architecture, producing a series of controversial essays that elaborated on his own architectural style by decrying ornament and a range of social ills. Adolf Loos’s minimalist attitudes are reflected in the works of Le Corbusier, Mies van der Rohe, and many other modernists and led to a fundamental shift in the way architects perceived ornamentation.

After showing Sam Bronner some of his houses Loos got the commission to design a house for him. The house should be situated in the center of Vienna enclosing four lots, surrounded by huge housing blocks. To avoid total enclosure the house should be lifted on a pedestal filled with service rooms. The house seemed to be one of the three nave type, of which the middle part is increased. The garden is situated in the south. House Wittgenstein, architecturally designed by Paul Engelman, is clearly inspired by this one. Later proposals for this house Bronner drift away from the original design. At last Kulka published a plan that is full of pomp and circumstance. Because of the different proposals it was difficult to show one end design. The entrance was, as usual, a puzzle. So we have two versions in the book of which we show one on the web. [from website]