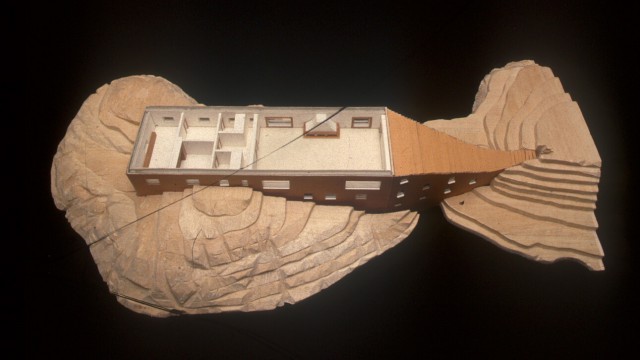 In 1980, American architect with Czech origin John Hejduk describes Adalberto Libera’s villa, designed for Curzio Malaparte, as a house of rituals and rites, of mysteries, an ancient play unraveling under Italian light.

Casa Malaparte is a red masonry box with reverse pyramidal stairs leading to the roof patio. On the roof is a freestanding curving white wall of increasing height. It sits on a dangerous cliff 32 metres above the sea overlooking the Gulf of Salerno. Access to this private property is either by foot from the Town of Capri or by boat and a staircase cut into the cliff. Casa Malaparte was abandoned and neglected after the death of Curzio Malaparte in 1957. It suffered both from vandalism and natural elements for many years and was seriously damaged, before the first serious renovation started in the late 1980s and early 1990s. Much of the original furniture is still there, because it is too large to remove. The marble sunken tub in the bedroom of his mistress still exists and functions. His bedroom and book lined study are still intact. Casa Malaparte’s interior and exterior are prominently featured in Jean-Luc Godard’s 1963 film, Contempt (Le Mépris) […]