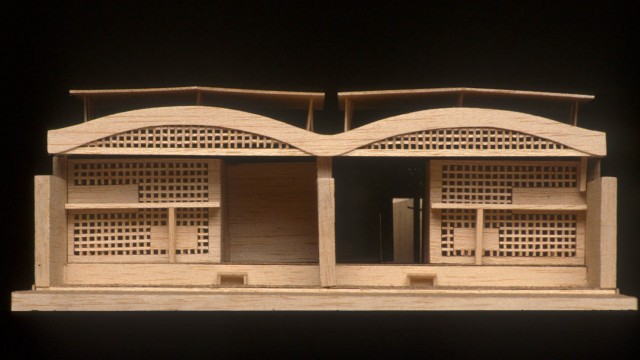 The programme for Chandigarh allows an area of 1200 sq.ft. for each family of peons. This 1200 sq.ft. includes part of the road, the garden, the house, etc. It is a terribly low figure! But had traditional examples been followed the result would have been the suburbia of the building estate.

It will be admitted that 1200 sq.ft. between four walls can make a home. Sun, space, greenery, part covered, part open in shade, and part completely in the open air with the inevitable variety of the nearby street. By placing all the families side by side, they are completely separated and have absolute privacy. It is the same principle which was employed in the large apartment blocks (at Marseilles for example) where on 17 floors the apartments are contiguous and of the same lay-out. This solution with part covered, part open, sun, space and greenery is a new one in housing design.

A group of 750 inhabitants forms a village, the roads be­come interior corridors of clean bricks on which one walks barefoot. Motor vehicles and drawn carts must stay outside the square (about 23 400 sq.yd.), which forms the unit called “a village”.