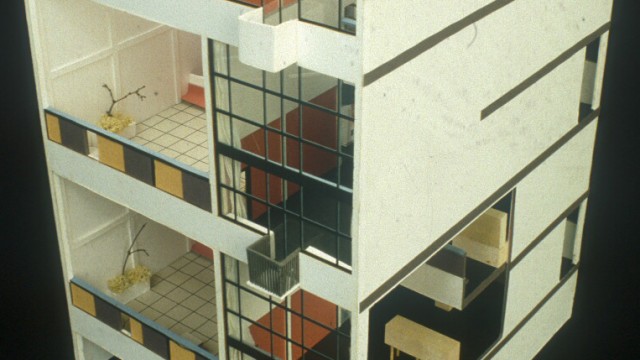 Esprit Nouveau pavilion was a temporary building, initially designed by Le Corbusier for the Exposition Internationale des Arts Décoratifs et Industriels Modernes. Le Corbusier’s ideas, too avant-garde for the times, were not followed up and so the reconstruction of the prototype house, built in Bologna in 1977 on the occasion of the French participation at SAIE that same year, assumed the significance of a particularly important cultural event, an element which is still associated with the Padiglione Esprit Nouveau, now the headquarters of the OIKOS Study Centre. Architects Jose Oubrerie and Giuliano Gresleri were responsible for the renovation.

The pavilion is composed of four floors for a total of 16 meters in height. The upper part of the exhibition shows the country. The following people. The third below the job. The area below summarizes these three conditions and presents the products.